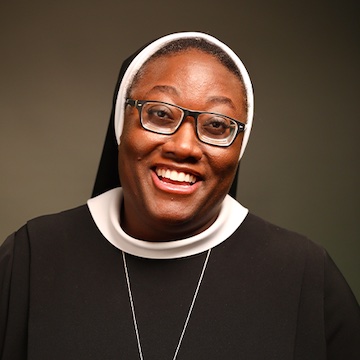 Sister Josephine is a native Texan, born and raised in Houston. She moved to Dallas in 1999 to begin studies at the University of Dallas where she completed a BA in Political Philosophy with a Business Concentration. Sister subsequently entered the banking industry, serving for 10 years as a Vice President in the Home Loans division of Bank of America in the roles of Operations Manager of a staff of 200 and later as a Project Manager. Sister was raised Baptist and entered the Catholic Church in 2005. Later, in November of 2011, she began her formation to be a religious Sister. In November of 2020 Sister Josephine professed her final vows as a Sister of the Holy Family of Nazareth.

She is a licensed counselor, serving as the school counselor for the cathedral grade school in Tyler, TX, and also in private practice.