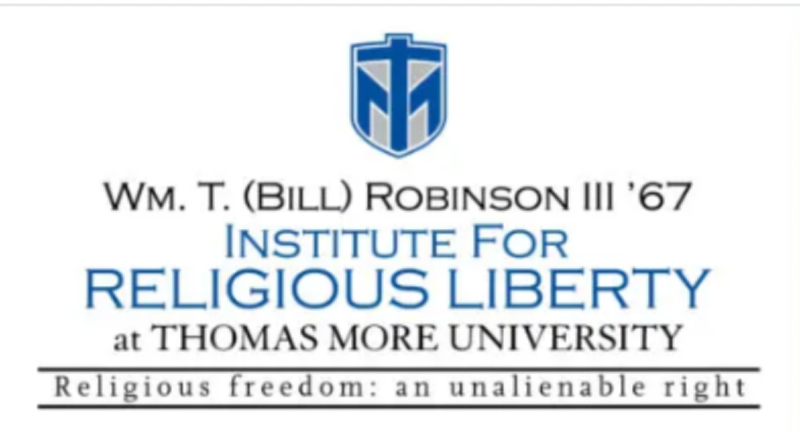 Spring event from the Institute for Religious Liberty at Thomas More University; free and open to all.

Keynote Speaker – Asma T. Uddin
Asma T. Uddin is a religious liberty lawyer and scholar working for the protection of religious expression for people of all faiths in the U.S. and abroad. Uddin is widely published on the topic, including two books: “When Islam Is Not a Religion” (2019) and “The Politics of Vulnerability” (2021).

Uddin is currently the visiting assistant professor of law at the Catholic University of America. After graduating from the University of Chicago Law School, Uddin served as Counsel for the Becket Fund for Religious Liberty and Fellow with the Aspen Institute’s Religion & Society Program in Washington, D.C. She served two terms as an expert advisor on religious liberty to the Organization for Security and Cooperation in Europe (OSCE), was a term-member of the Council on Foreign Relations, and has held fellowships at Harvard, Georgetown, and UCLA’s law schools.

In addition to her legal work, Uddin writes and speaks on Muslims and gender. As the founding editor-in-chief of altmuslimah.com, she managed the web-magazine and organized vigorous debates and conferences on the multifaceted issues of gender, politics, and religion. Uddin has advised numerous media projects on American Muslims, including most recently as executive producer for the Emmy and Peabody nominated docu-series, “The Secret Life of Muslims.”

William Madges, Ph.D., is the chair of the theology department and the faculty director of the Brueggeman Center for Dialogue at Xavier University. His interfaith work includes being co-creator of a multimedia exhibit entitled “A Blessing to One Another: Pope John Paul II and the Jewish People.” Together with two colleagues, he received the Ninth Annual Eternal Light Award in 2008, presented by The Center for Catholic Jewish Studies for “outstanding contribution in the cause of interfaith relations and human rights.” In his current capacity as faculty director of the Brueggeman Center, he collaborates on interfaith projects with Jewish, Muslim, and other faith communities as well as serves on the Steering Committee of the Festival of Faiths.